The dataset “COVID-19 restrictions by country.csv” provided by Humanitarian Data Exchange shows current travel restrictions. Information is collected from various sources: IATA, media, national sources, WFP internal, or any other. The dataset is licensed under the Creative Commons Attribution International License Attribution 3.0 IGO. Special thanks to Humanitarian Data Exchange for providing access to the data.

Determination of the level of restriction:
Only simple sentences where the meaning of the restriction is direct were considered. For example:

The image below shows the results of POS tagging and dependency parser as a graph where the restriction level was marked as “closed” due to the presence of the verb “suspended”: 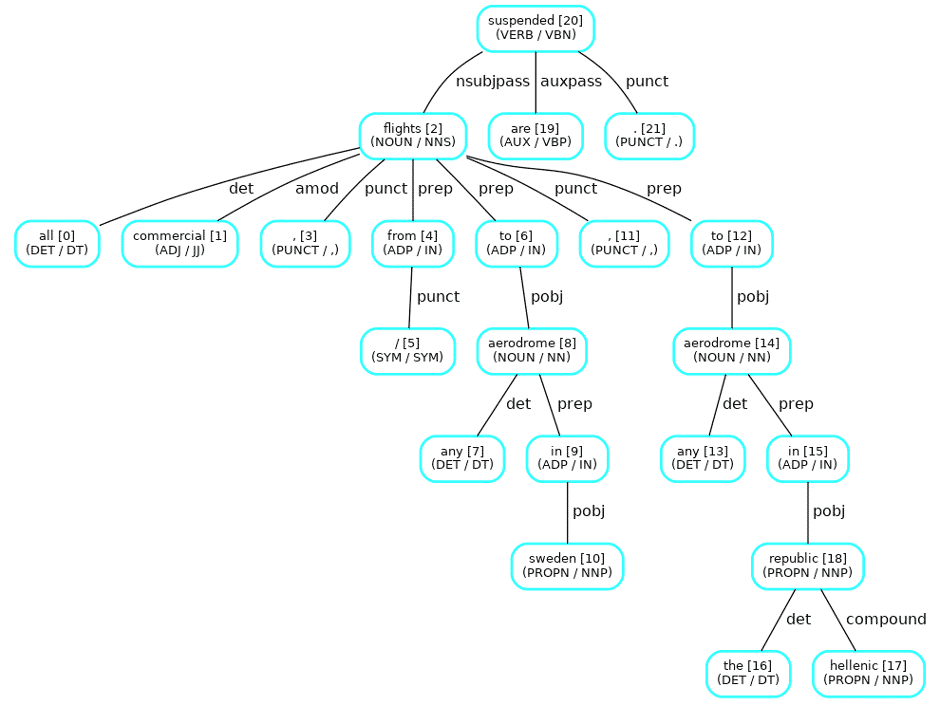 The image below shows the results of POS tagging and dependency parser as a graph where the restriction level was marked as “open” due to the presence of the verb “permitted”: 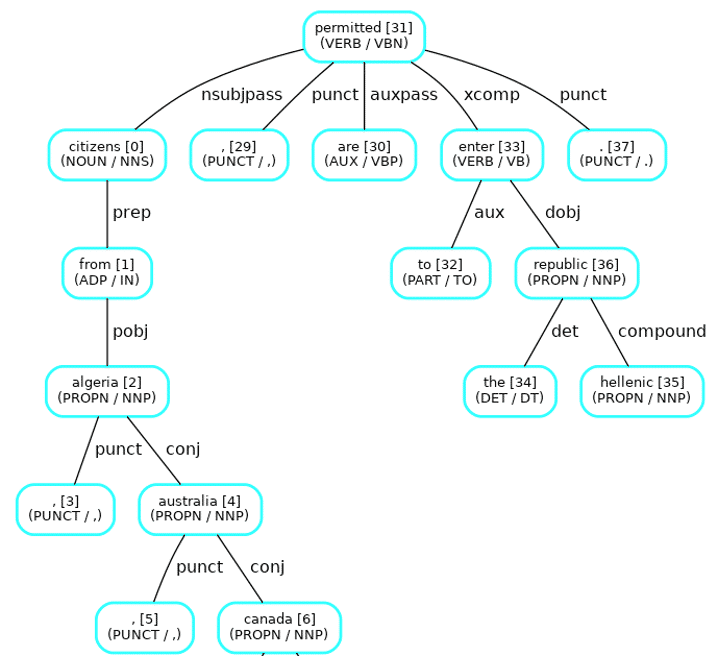 If a sentence has both positive and negative verbs/nouns then the sentence was marked as “restricted access” as the intent of restriction could not be extracted directly.

Extraction of foreign country names:
Spacy’s Named Entity Recognizer (NER) was used to identify country names mentioned in the text. It was identified that different aliases of a country name were used in the text. Some countries mention the United Kingdom as the UK, whereas some countries mention it as Great Britain. So, a list of country aliases was collected in a file and the NER was extended using Entity Ruler to identify those country names. Mention of restrictions for a group of countries such as EU, non-EU were also added to the Entity Ruler and the countries associated with these mentions were then mapped to the respective countries. Once the foreign country names were extracted from the sentences the corresponding restriction information associated with that sentence was mapped to these foreign countries.

The below image shows the country names identified by Spacy’s default NER (tagged as GPE):

The below image shows the same result as above after extending Spacy’s NER with custom patterns of country aliases:

For some countries, the entry is closed for all incoming passengers. So, the commonly used noun chunks such as “all passengers”, “all flights”, “all airports” were identified, and the restriction was mapped to all countries.

The analysis was extended to multiple weeks and the results were displayed on a world map in a dashboard.

A screenshot of the dashboard is shown below:

Rule-based extraction works for simple sentences with limited verbs. As the complexity of sentences increases, more rules have to be added to extract the restriction level and it becomes difficult to maintain the code. So a better approach would be to label the sentences and build a supervised learner

This information can be used for educational and research use. The authors do not recommend generalizing the results and draw conclusions for decision-making on these sources alone.

To try out the analysis, check out the code available on GitHub.

Special thanks to Klaus Paul, Mehrnoosh Vahdat and Maria Ivanciu who helped in this work.
We are a team of data scientists from IBM’s Data Science & AI Elite Team, IBM’s Cloud Pak Acceleration Team, and Rolls-Royce’s R² Data Labs working on Regional Risk-Pulse Index: forecasting and simulation within Emergent Alliance. Have a look at our challenge statement!